The Daemons are coming!

The next box opened in my audit contained part of my Daemons of Chaos army. I’ve not used it much, because it is way too brutal for casual play.

When I do use it then usually leading my army will be a Kipper, or Keeper of Secrets to give it its proper name. Just add “Siren Song” and the broken “Torment Blade” and you are good to go. 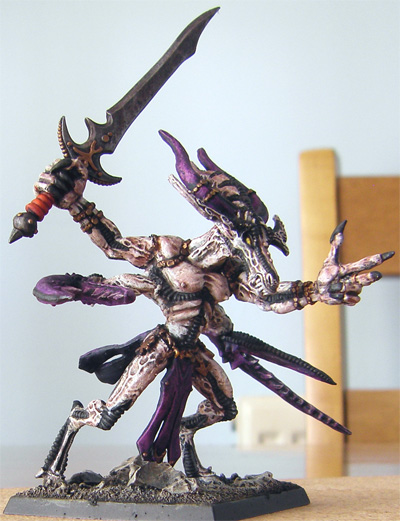 My second choice Greater Daemon would be the Lord of Change. Mine was painted a long time ago and is showing signs of her age. Her base could also do with an update to bring her in line with the rest of the army. At the moment she’s on the lighter coloured base because she was originally used with my Chaos Space Marines.

I’ve recently acquired a third Greater Daemon; this Bloothirster. I’ve never used it in battle, but one of my club mates was about to put it on eBay and I took it off his hands. It doesn’t match my colour scheme, so he may get rebased if and when I do the Lord of Change.

There will me more Daemonic incursions (or posts if you prefer) later this week as and when I find the time to photograph them, plus a “army” page for them shortly in the armies section.

This entry was posted on Monday, July 20th, 2009 at 13:39 and is filed under Score update, Warhammer. You can follow any responses to this entry through the RSS 2.0 feed. You can leave a response, or trackback from your own site.