My first batch of Khador models are now nearing completion. First up are the Widowmakers. These were done as a test of the colour scheme I had in mind.

As you can see they are predominately white, and after painting these I decided that I liked the scheme and that even with the extra grief painting white involves it would be worth it. In retrospect the jacks with their large white areas were just too much effort to paint, but more of them later.

Those two are my favourite models, so very full of character. A bit of shame that my face painting skills don’t do them justice.

The other two models in the unit are identical. Nice models, but it would have been nice if all four had been unique. 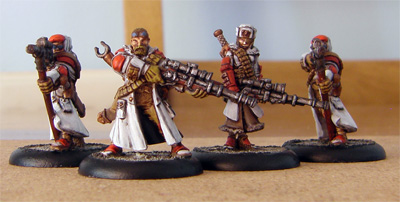 That’s four more models towards my Pledge. Slow progress, but progress all the same.

This entry was posted on Friday, June 18th, 2010 at 12:47 and is filed under Khador, Pledge Update, Warmachine. You can follow any responses to this entry through the RSS 2.0 feed. You can leave a response, or trackback from your own site.

One Response to Khador Widowmakers