Nothing much finished this week, but quite a lot of figures are stacking up on the “too be varnished” pile. Next week I should have some Cygnar jacks for you, and perhaps some Khador ones too.

In the meantime though here’s a handful of Orc commanders. 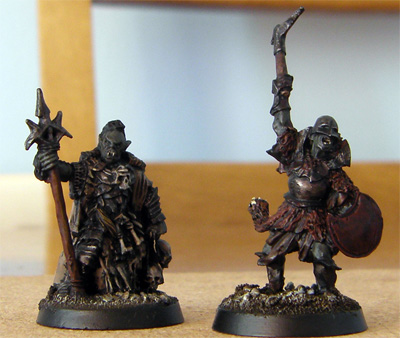 I suspect the one on the left may be a version of Gorbag, but I’m not sure. The one of the right is certainly Grishnakh though.

That’s four more models towards the 2010 pledge, which now stands at.

This entry was posted on Monday, July 12th, 2010 at 16:14 and is filed under Pledge Update, War of the Ring. You can follow any responses to this entry through the RSS 2.0 feed. You can leave a response, or trackback from your own site.